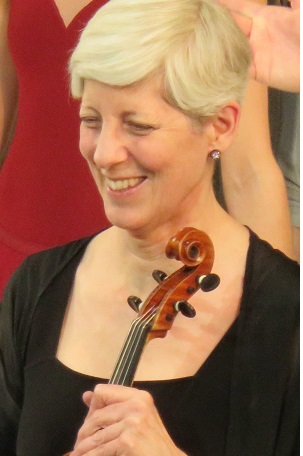 Angela Rudden received a B. Mus in Kingston Ontario and went on to complete her Masters in Viola Performance in Munich.  While in Germany Angela played regularly with the Stuttgart Philharmonic, the Tibor Varga Chamber Orchestra as well as both the München and the Kölner Chamber Orchestras.

She has performed both as soloist and as chamber musician throughout Canada, the United States, Europe and Japan.

Angela is currently Principal Viola of the National Ballet of Canada Orchestra, where she often appears regularly as a soloist at the Four Seasons Centre and most recently at the National Arts Centre.  She has also played in the Canadian Opera Orchestra, Les Violons du Roy, the Toronto Symphony, Esprit Orchestra and Aradia Ensemble.

Angela is a viola coach at Cardinal Carter Performance High School, as well a violin/viola teacher at Dixon Hall Music School.  She has been playing and coaching chamber music in Prince Edward County at Music at Port Milford Chamber Music Camp and Festival for the past 20 some years.