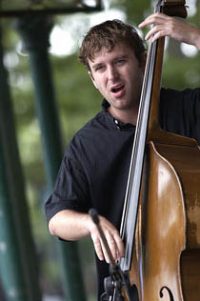 Jazz bassist Artie Roth graduated from York University in 1992 with the Oscar Peterson Scholarship.  As a leader of his own group, Artie released “Parallels” in 2005, “Currently Experiencing” in 2013, and most recently “Discern” in 2015. Several of his compositions have been incorporated into the post-secondary educational repertoire/curriculum of numerous student Jazz Ensembles and composition courses at York University, The University of Toronto and Humber College.  Artie currently holds the position of Bass Instructor and Course director at York University, where he is presently pursuing his Master’s Degree in Musical Composition.

Artie has been recorded on over 50 CDs, including Rich Underhill’s 2003 JUNO award-winning Tales from the Blue Lounge and 2007 JUNO-nominated Kensington Suite, Sophie Milman’s JUNO-nominated debut CD, and Rockit 88’s 2004 JUNO-nominated Too Much Fun. Artie has toured extensively across Canada and the U.S., and his overseas engagements have included performances with The Flying Bulgar Klezmer Band in Germany (1996), The Steve Koven Trio in Mexico (2003) and Columbia (2005), The Shuffle Demons tour of Europe and Scandinavia (2007), Kollage in Barbados (2011) and Antigua (2013), and the Richard Underhill Quintet in Mexico (2012).

Artie is sponsored by York University