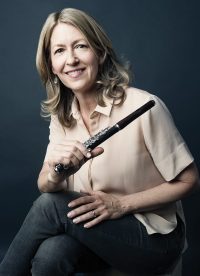 Camille Watts has been flutist and solo piccoloist of the Toronto Symphony Orchestra since 1990, positions she held previously with the Atlanta and Denver Symphony Orchestras. In Toronto, Camille has performed as piccolo soloist with the TSO, and has also performed with the Canadian Opera Company, Soulpepper Theatre, Music Niagara, in many collaborations with HearHere Productions, and on many pop and classical recordings, film and TV soundtracks.

Camille is Adjunct Professor at the University of Toronto Faculty of Music, where she teaches flute and piccolo, coaches chamber music, and leads seminars in the graduate program. She has also served as flute and piccolo faculty at the National Youth Orchestra of Canada. As a massage therapist working with musicians, she joined a group of Toronto artists in creating the Artists’ Health Centre at Toronto Western Hospital, and served on the Foundation Board of Directors.