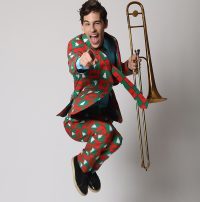 Christopher is best known as the most subscribed brass musician on YouTube. He’s a trombonist, arranger, and marketing consultant based outside of New York. He has been playing piano since he was 6 years old, trombone since he was 10, and he has been composing/arranging since he was 12. He has a Bachelor of Music for classical trombone performance from the SUNY Purchase Conservatory of Music in New York.  He is a Denis Wick (London) concert artist.  He is the Youth Workshop Director of the International Trombone Festival and a marketing consultant for the International Trombone Association.

Christopher is best known for his all-trombone arrangements of popular songs. His YouTube Channel has been gaining popularity since the spring of 2014 when, using a looping station to compose the song on the spot, his cover of Pharrell Williams’ “Happy” went viral. His videos have amassed over 24 million views and a following of over 140,000 subscribers. In 2018, his collaboration with the International Trombone Festival of Bohemian Rhapsody went viral.  In April of 2014, Christopher independently released his first cover album, “Breakthrough”, which was followed by his Christmas album “Smiling’s My Favorite”. More recently, his original pop album “Half Man, Half Machine” mixes acoustic sounds with electronic instruments.