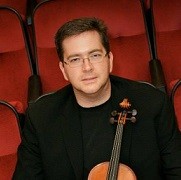 Corey has distinguished himself as a soloist and chamber musician with performances in Canada, Germany, the United States and China.  Concerto appearances include performances of such works as Vivaldi’s The Four Seasons, the Mendelssohn Violin Concerto, Mozart’s Sinfonia Concertante, Beethoven Triple Concerto, Beethoven Violin Concerto, Sibelius Violin Concerto, Brahms Violin Concerto and Brahms Concerto for Violin and Cello.  20th Century solos with orchestra include Mozetich’s Affairs of the Heart for Violin and Orchestra and Vaughn Williams’ The Lark Ascending.  He has performed as concertmaster for a number of musicals including recent productions of Beauty and the Beast, the Hugh Jackman Show and Next to Normal and has worked with such pop icons as Hugh Jackman and Chantal Kreviazuk.