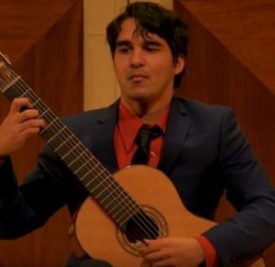 As a performer, Daniel has placed as a finalist in the Montreal and Hamilton International Guitar Competitions, has taken first prize in the OMFA Provincial guitar competition twice, and placed second in the 2016 National Music Competition in Edmonton, Alberta. He has given recitals in Canada, the US, Japan, Austria, and Italy, has premiered dozens of new works for guitar by composers from all over the world. He recently released his debut solo guitar album, Inspirations: New Music for Solo Guitar, in 2022, which was featured on CBC Radio’s album of the week in March of this year on all streaming platforms thanks to a generous recording grant from the Ontario Arts Council.