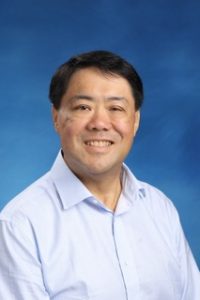 David Lum is a graduate of the University of Toronto (Mus. Bac. /Ed. 1988, B. Ed. 1990) and completed the Graduate Diploma program in Wind Conducting at the University of Calgary in the summer of 2001. He is a past conductor of the Scarborough School’s Symphonic Band and Wind Symphony, and has served as a Senior Administrator of the Scarborough Music Camp. David served as the Conductor of the Northern Ontario Music Festival Honor Band from 2008-2011 and is a past conductor of the Toronto Youth Concert Winds, and Assistant Conductor of the Toronto Youth Wind Orchestra. In June of 2016, David was featured as a Guest Conductor for TYWO’s 25th Anniversary Tour of New York City, culminating in a performance at Carnegie Hall.  David is a Past President of the Ontario Band Association (OBA), and currently serves as President of the Lambda Iota chapter of Phi Beta Mu International Bandmasters’ Fraternity.  David was a sessional instructor of the Summer Additional Qualifications course in Instrumental Music for the Ontario Institute for Studies in Education at the University of Toronto, from 2008-2014, and currently teaches the Tuba/Euphonium studio at York University.  In 2009, David received an Honorary Life Membership from the Ontario Band Association, and in May of the same year, was awarded the Keith Mann Outstanding Band Director Award at MusicFest Canada’s “The Nationals”. In December 2012, David was inducted as a Laureate of the Legion of Honor for the John Philip Sousa Society. David is a Conn-Selmer Educational Clinician.

David retired from the Toronto District School Board in January of 2021, after a 32-year teaching career with the Toronto District School Board and the Scarborough Board of Education. During that time, he served as Curriculum Leader and Assistant Curriculum Leader of Music at Agincourt Collegiate Institute. Prior to that, he was the Band Director at Bliss Carman Sr. Public School. Ensembles under his direction have been recognized for excellence both provincially and nationally, and have performed at Roy Thompson Hall, Massey Hall and the Toronto Centre for the Arts, as well as the Ontario Provincial Legislature.