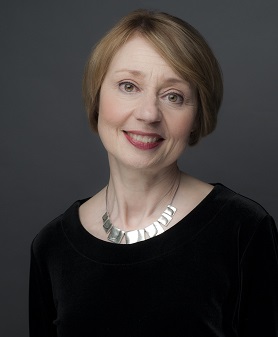 Dr. Hilary Apfelstadt is Director of Choral Activities and Professor of Conducting at the University of Toronto where she was named the inaugural Faculty Teaching Excellence Award winner in 2013.  She holds the Elmer Iseler Chair in Conducting.  She is also Artistic Director of Exultate Chamber Singers, a semi-professional ensemble in Toronto.  Raised in Nova Scotia, she earned degrees from the University of Toronto, the University of Illinois, and the University of Wisconsin-Madison.  She holds an ARCT in piano performance.  She has conducted choirs at divisional and national conferences of the American Choral Directors Association (ACDA), and conducted the University of Toronto MacMillan Singers at Podium, the national conference of Choral Canada.  She has led choral festivals in Europe, and at Carnegie Hall and Lincoln Center in New York.   In 2009, she conducted the Mormon Tabernacle Choir in a live broadcast of “Music and the Spoken Word.”  She has directed all-state choruses in more than 35 states and conducted both the 2011 Ontario Youth Choir and the 2014 National Youth Choir of Canada. A frequent conference presenter, she often does conducting masterclasses and has participated in several university conducting residencies.

Dr. Apfelstadt is a prolific author, having published multiple articles in professional journals, as well as chapters in two books:  Wisdom, Wit and Will: Women Choral Conductors on their Art (GIA, 2009) and Conducting Women’s Choirs: Strategies for Success (GIA, 2012).  She is a contributing author to Teaching Music in Performance Through Choir, volume 4 (GIA, 2017) and is co-editing volume 5 (to be published in 2019). A member of the Editorial Board for the ACDA Choral Journal, she also write s a regular choral column for The Canadian Music Educator. Her book on Canadian composer Ruth Watson Henderson, entitled I Didn’t Want It to be Boring, was released by Prism Publishers in the fall of 2017.