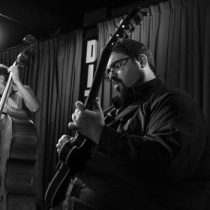 Jake Hanlon is an Assistant Professor of Music at Saint Francis Xavier University in Antigonish (Nova Scotia), and has been a member of the Faculty of Music since 2008. As a member of the Faculty, Hanlon teaches Jazz Guitar, Improvisation and Composition. He has performed with Canadian artists Paul Tynan, Mike Murley, Kirk MacDonald, Ethan Ardelli, Mike Rud, Dianne Nilani and David Braid, and international artists Dave Liebman, Chad Wackerman, Tim Haggans and Peter Erskine.

Jake graduated in 2003 from Saint Francis Xavier University (B.Mus w/Honours) and in 2008 from the University of North Texas (M.M Jazz Studies), where he was Graduate Teaching Fellow for Jazz Guitar. He is an alumnus of the Betty Carter Jazz Ahead composition residency in Washington DC (2007).  Jake earned two ECMA nominations for Jazz Recording of the Year for the albums Follow in 2012 and Autumn Song in 2015. Jake endorses Thomastik-Infeld Strings.