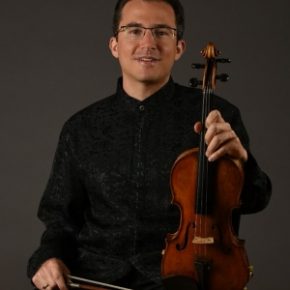 Jeremy Mastrangelo has performed regularly with NACO since the end of 2011 and was appointed as a full-time member in 2014. Previously, Jeremy was the associate concertmaster of the Syracuse Symphony Orchestra from 2001 until 2011, and designated to be the orchestra’s next concertmaster in 2010. During his tenure with the SSO, he was a featured soloist on multiple occasions, including performances of Bach’s Concerto for two violins with Jaime Laredo, Brahms’ “Double“ Concerto, the Sibelius violin concerto, and Vivaldi’s Four Seasons.  He has been a guest concertmaster with the Kalamazoo Symphony Orchestra, the Fort Wayne Philharmonic, the Omaha Symphony, the Oregon Symphony, and the National Ballet of Canada. Prior to his work in Syracuse, Mastrangelo was co-concertmaster of the New World Symphony in Miami. Mr. Mastrangelo has been a finalist in the Julius Stulberg competition and was also the top prize winner in the National Federation of Music Clubs student auditions. From 2004 until 2009, he was an Affiliate Artist faculty member at Syracuse University.

Jeremy holds degrees from the Cleveland Institute of Music and the University of Michigan, where he studied with William Preucil and Paul Kantor, respectively. Mastrangelo presently resides in Ottawa with his wife and two children, both of whom play piano and violin in addition to their  interests in baseball, basketball, dance, art, and most anything Star Wars related.

Jereny is sponsored by the National Arts Centre Orchestra.