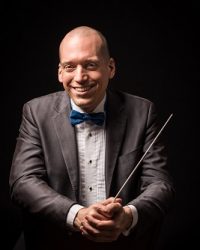 Jonathan Dagenais holds a Master’s degree in Conducting from McGill University and a Bachelor’s degree in Composition from the Université de Montréal.  Currently, he is a guest lecturer at the Sherbrooke University School of Music, where he teaches instrumental composition (wind orchestra).  In addition to teaching in cegep and university, (music theory, composition, analysis, ear training, musicianship and conducting), Jonathan enjoys an active career as a composer and arranger for wind orchestra. His compositions are included in many North American concert band music festival syllabuses, and are currently published worldwide by Alfred Music, Hafabra Music and Eighth Note Publications.

​Jonathan is conductor and artistic director of the Orchestre à Vents Non Identifié (OVNI), a Montreal wind orchestra he co-founded in 2005. In 2010 and 2017, he was appointed conductor of the McGill Wind Orchestra. He is also the conductor of the Cercle Philharmonique de Saint-Jean-sur-Richelieu (CPSJ), a position he has held since September 2012. In September 2015, he was named conductor of the Orchestre de jeux vidéo – OJV (Montreal Video Game Orchestra), an ensemble dedicated to video game soundtracks. Most recently in 2019, he was appointed principal conductor of  the Ottawa Pops Orchestra (OPO).  In 2017, he became the artistic director of Musicfest Quebec. He has been a guest conductor for many Canadian honour bands including The National Youth Band of Canada (NYB).  Jonathan is a Yamaha Canada Master Artist Educator, a guest conductor and clinician for Twigg Musique and the Fédération des Harmonies and Quebec Symphony Orchestras.