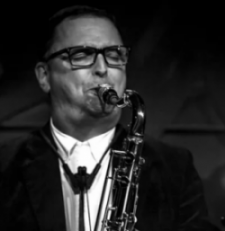 Kelly has toured extensively in Canada, the United States, Japan, Thailand, Europe, South Korea and China, including a nine-month tour with legendary trumpeter Maynard Ferguson.  The Kelly Jefferson Quartet release Next Exit, was nominated for a 2011 Juno Award.  Mr. Jefferson has also adjudicated at music festivals across Canada and has given numerous workshops throughout Canada, the United States and China.

Kelly is sponsored by York University