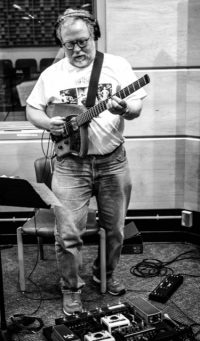 Kevin Brunkhorst is Chair of the Music Department at St. Francis Xavier University.

He attended the University of North Texas 1983-87 (Bachelor of Music, Composition) and 2001-04 (Master of Music, Jazz Studies), where he was a member of the renowned One O’Clock Lab Band (1986, 2002-2004). He started at St. FX in 2004, teaching jazz guitar, jazz composition, and music technology.  In subsequent years, he also taught courses in music theory, modern jazz history, history of popular music, and the Beatles.  He also leads the Guitar Ensemble, in which guitarists learn a very high standard of performance and reading skills. He has released four CDs as a leader or co-leader (on Armored Records), produced recordings for several others, and written about 100 charts for guitar ensemble, many of which are published by UNC Jazz Press.