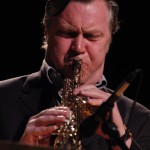 With an established reputation as one of Canada’s leading saxophonists, Kirk MacDonald cut his first record at the age of thirteen. Throughout his career, he has received numerous awards, and has worked with many leading musicians in a variety of musical genres. Kirk also leads the Kirk MacDonald Jazz Orchestra (KMJO), a 19-piece all-star ensemble dedicated to performing his original compositions and featuring arrangements by leading Canadian and U.S. Writers. The KMJO released its debut recording Deep Shadows in March 2011, and in May of 2012. His latest recording Vista Obscura was released in 2014 and features jazz legend Harold Mabern and special guest saxophonist Pat LaBarbera. Kirk has been active as an educator for 27 years at leading jazz studies programs such as at the University of Toronto and McGill University. Kirk is presently a full time professor at Humber College in Toronto, where he holds a cross appointment in the Music Degree Program and the Community Music School. Kirk also acts as the Artistic Director for the “Youth Jazz Canada” project and directs the “National Youth Jazz Combo”. This project also hosts a 2 week workshop in the summer for high school and post-secondary students.