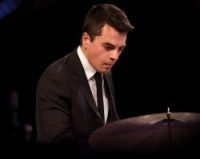 Matthew Chalmers holds a Bachelor of Music Degree from Humber college, a school he attended since he was 3 as part of the Humber College’s Community Music program. Matthew also performed at MusicFest for many years and was the recipient of numerous awards and scholarships including Zildjian Outstanding Young Drummer four times, the Music Industries Association of Canada (MIAC) scholarship, as well as the inaugural Lou Williamson Scholarship for Outstanding Drumset Player. In May of 2011, The Hnatyshyn Foundation awarded Matthew with the Oscar Peterson $10,000 Grand for Jazz Performance.

While continuing to play throughout Canada and US, Matthew is now an active film composer, writing for two network television shows as well as movies for the Lifetime network.