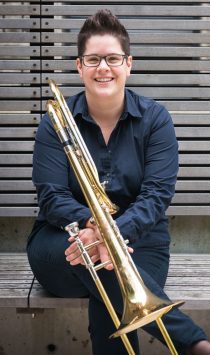 Megan Hodge is an active freelancer on tenor and bass trombone, and has made Toronto her home for the past twelve years. She is on staff at the University of Toronto.  Originally from Edmonton, Alberta, Megan studied at the Glenn Gould School (Artist Diploma), McGill University (MMus) and the University of Alberta (BMus). She performs regularly with the Toronto Symphony Orchestra, the Canadian Opera Company, The National Ballet Orchestra of Canada, the Hamilton Philharmonic, Hannaford Street Silver Band and is a founding member of the Toronto Brass Quintet.

She has held positions as Principal Trombone with the Kingston Symphony Orchestra and the Victoria Symphony (1 year position), trombonist in The Royal Canadian Artillery Band with the Canadian Armed Forces, and as the Director of Music for the regimental band of The Queen’s Own Rifles of Canada. Megan is a member of the Toronto Brass Quintet, whose recent collaboration with cellist Cris Derksen’s Orchestral Pow Wow CD was nominated for a Juno.