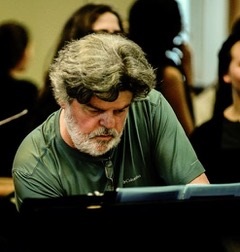 In 1983 he was nominated for a GENIE Award  for his original soundtrack for the movie “Les Doux Aveux “. Marois moved to British Columbia in 1988. Just recently retired, Réjean Marois taught at Capilano University for the Jazz Studies Program for thirty years. He conducted vocal ensembles, jazz ensembles and taught improvisation and instrumental/vocal arranging.

Furthermore, Réjean has been involved for the last 20 years as arranger/ conductor for the Cap Jazz Series concerts featuring renowned jazz artists from around the world. In May 2012, he received an Award for Excellence In Empowering Learning from Capilano University.       Réjean is an Associate Composer to the Canadian Music Centre, a member of the Canadian League of Composers and a member of the Society Of Composers Inc. His is also on the board of directors for Vancouver Pro Musica.

His compositions and arrangements has been performed in Canada, U.S.A and in Europe; he has been in demand throughout Canada and the U.S. as a clinician, adjudicator, conductor, music advisor and arranger. His vocal adaptation of Maria Schneider’s  “Winter Morning Walks “       will be soon published on www.mariaschneider.com.

For fourteen years, he was the artistic coordinator of the Jazz Singing Workshop at Domaine Forget, St. Irénée in the magnificent Charlevoix region of Québec. Born and raised in the province of Québec, he worked as a composer, arranger, trombonist, publisher, educator and performed all across North America and Europe.