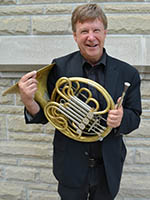 Ronald George is a musician in a variety of roles: teacher, soloist, chamber and orchestral player. He has been principal horn with Orchestra London (Canada) since 1979 and appeared as soloist with the orchestra numerous times.  Born in San Francisco, Ron’s studies began with Earl Saxton and Robert Creech through high school in Vancouver. At the University of Toronto, he studied with Eugene Rittich. In Germany he worked with Hermann Baumann.  He is a Lecturer at Western University in London, ON