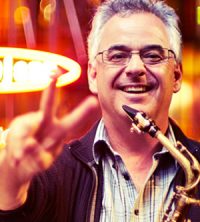 Sal is a member of The Tom Kubis Big Band, and can be heard with Gordon Goodwin’s critically acclaimed Grammy-winning Big Phat Band.  A few of the artists Sal has also recorded with include Paul McCartney, Natalie Cole, John Legend, Christina Aguilera, Lady Gaga, Stevie Wonder, Lalo Schifrin, Brian McKnight, Michael Buble, Keely Smith, Barbra Streisand, Joey DeFrancesco, and Maynard Ferguson. He has been a member of the Dancing with the Stars House Band and the Academy Awards Orchestra, performed at the Gala for the President at Ford’s Theater in Washington D.C. and as a soloist with the Pacific Symphony, the San Diego Symphony and the Los Angeles Philharmonic.

Sal is currently a Professor of Saxophone at California State University Long Beach and conducts clinics and master classes across the country. He is also a clinician for Disney’s Performing Arts Workshops at the Disneyland Resort in Anaheim, Ca as well as Disney’s All American College Band at Disneyland.

Sal is sponsored by Conn-Selmer, Inc.