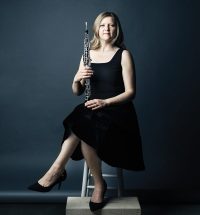 Sarah Jeffrey is Principal Oboe of the Toronto Symphony Orchestra. A regular soloist with the TSO, Sarah has also appeared as soloist with numerous orchestras across Canada, performing works by Bach, Mozart, Vaughan Williams, Marcello and Haydn. She is also an active recitalist and chamber musician, making frequent guest appearances with the Amici Chamber Ensemble, the ARC Ensemble, and Trio Arkel.  A devoted performer of new music, Ms. Jeffrey has commissioned several chamber works, including Chaconne for Oboe, Horn, and Piano by Erik Ross, and Rhapsody by Ronald Royer.

Sarah is on faculty at The Glenn Gould School at The Royal Conservatory and the University of Toronto, and spends her summers at the Orford Arts Centre and the National Youth Orchestra of Canada. Sarah was a recipient of the Ontario Arts Council’s Chalmers Award for Creativity and Excellence in the Arts, and can be heard discussing the finer points of the oboe on CBC radio, both as a performer and as a guest on several podcasts.