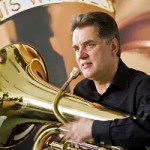 Stephen Wick is the CEO of Denis Wick (London) Products Ltd.  He earned his Bachelor of Music (Honours) at the University of Surrey (Guildford, England) in 1976.  Stephen plays tuba in the Anima Eterna Brugge orchestra, based in Bruges, Belgium.  He was a member of the Oslo Philharmonic, and has performed with leading orchestras from Berlin, Hamburg, Paris, Milan, Helsinki and Amsterdam. He teaches serpent, ophicleide and tuba at the Royal Academy of Music, and at The Purcell School in Bushey, England, the oldest specialist music school in the UK.

In the jazz field, he has played in bands led by such greats as John Dankworth and Kenny Wheeler. He has played tuba on hundreds of film scores, from John Huston’s ‘The Man who would be King’ in 1975 to modern films such as Alien, Rambo, Batman, Gladiator and Star Wars. He has also recorded with Pink Floyd, Paul McCartney, Frank Zappa and Led Zeppelin.