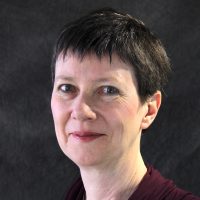 Oboist Susan Butler (Morris) has been a member of the Ottawa Symphony Orchestra since 1979: as English Hornist from 1979 to 1984 and as Principal Oboist from 1984 to the present.  Susan’s busy career as a freelance musician frequently includes performances with ensembles such as the National Arts Centre Orchestra, Thirteen Strings, l’Ensemble Prisme, and the Ottawa Choral Society.  As a chamber musician, Susan plays in The Harmonious Pigs Reed Trio with fellow OSO principal musicians Shauna Barker and Ben Glossop, and from 2004 to 2019 she was oboist of the Bel Canto Wind Quintet. Susan graduated from the University of Ottawa in 1980 with a Bachelor of Music degree in Oboe Performance. Her post-graduate studies were with the Orchestral Training Program of the Royal Conservatory of Music in Toronto.

Susan is a dedicated teacher, working at Carleton University, in her private studio in Deep River, and having worked at the Kincardine Summer Music Festival from 1993 to 2002, the Ottawa Youth Orchestra Academy from 1999 to 2015, and Deep River’s Summermusic day-camp from 1993 to the present.