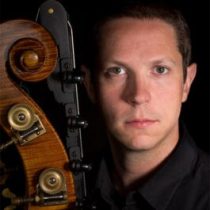 Tony Flynt is Principal Bass of the Canadian Opera Company in Toronto.  He has appeared as guest Principal with the Saint Paul Chamber Orchestra, Bard Music Festival, American Symphony Orchestra, and as a guest with the bass sections of the San Diego, Houston, and Boston Symphony Orchestras. Tony is a former member of the Grammy-nominated chamber orchestra, A Far Cry, and was a winner of the New England Conservatory’s Concerto Competition.

Tony was a fellow of Carnegie Hall’s Ensemble Connect (formerly Ensemble ACJW/The Academy) where he taught and performed in New York City public schools, community centers, hospitals, and prisons, in addition to a chamber music residency at Carnegie Hall.  He is an Adjunct Professor at the University of Toronto, and served as Co-Director of the esteemed Boston University Tanglewood Institute’s Double Bass Workshop.  He attended Rice University, graduating with degrees in Music and Hispanic and Classical Studies, cum laude.  Tony attended the New England Conservatory as an Edward Hyde Cox Presidential Scholar, where he received a Master’s degree with honors, and the Borromeo Quartet Guest Artist’s award.