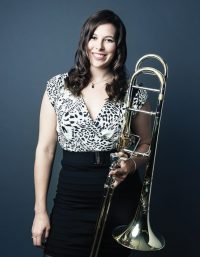 Vanessa Fralick joined the Toronto Symphony Orchestra as Associate Principal Trombone in 2013. Prior to her current position, she played three seasons as Acting Associate Principal Trombone of the St. Louis Symphony. . She completed her undergraduate degree at the University of Toronto, and won her first orchestral position with the San Antonio Symphony in 2009, while pursuing her master’s degree at The Juilliard School. She has performed with major orchestras in San Francisco, Montreal, Boston, Jacksonville, Utah, Malaysia, and played two summers in the prestigious Verbier Festival Orchestra in Switzerland.  Vanessa is on faculty at the University of Toronto, the National Music Camp of Canada, National Youth Orchestra of Canada, and is the brass coach of the Toronto Symphony Youth Orchestra.

Vanessa also performs frequently as a soloist, most recently as a guest artist at Trombonanza 2017 in Argentina, at the 2016 International Trombone Festival in New York City and at the 2015 American Trombone Workshop in Washington, D.C. She won first prize in several major competitions, including the 2012 Elora Festival Competition, the 2011 Montreal Symphony Concerto Competition and the 2010 Susan Slaughter International Solo Brass Competition, where she also performed as a guest artist at the International Women’s Brass Conference. In 2009, she won concerto competitions both at Juilliard and at the Music Academy of the West in Santa Barbara, California.