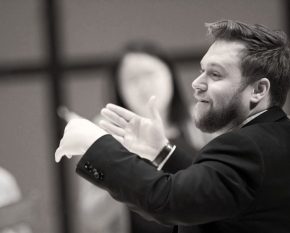 Brad is a compelling conductor, composer and adjudicator from Burlington, Ontario. He is currently the music director of Wavestage Theatre Company in north Toronto, assistant director of the Bach Chamber Youth Choir, and assistant music director for Christ’s Church Cathedral in Hamilton. Brad graduated in 2016 with a master’s degree in choral conducting from the University of Toronto, where he was the assistant conductor of the Men’s Chorus. In 2014, he earned his bachelor’s degree in music theory and composition from Western University and writes for choral ensembles across Canada today. In March of 2016, Brad was invited to adjudicate the Ontario Vocal Festival, and has since been invited to serve as a clinician for various vocal festivals and choral retreats across Canada.

He has had the privilege to conduct in masterclass for world-renowned ensembles such as the National Estonian Male Choir and the Gloucester Cathedral Choir, and was the assistant conductor for the Ellison National Honour Choir, from 2015 to 2018. Beyond his love for choral music, Brad is the lead singer and keyboardist for the critically-acclaimed band “Family of Things”.