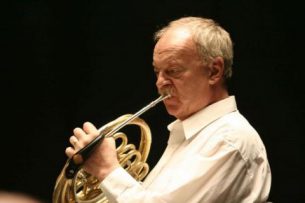 James MacDonald earned his BA from Queen’s University and his M. Mus from Western University, where he completed his master’s thesis ‘Virtuosi and the horn repertoire.’ His teachers included Eugene Rittich in Toronto (1970-1), Frantisek Solc at the Janáček Academy of Music, Brno, Czechoslovakia, and Barry Tuckwell in London. He also studied in 1978 with Wilhelm Lansky-Otto in Stockholm, Sweden.

James is sponsored by York University